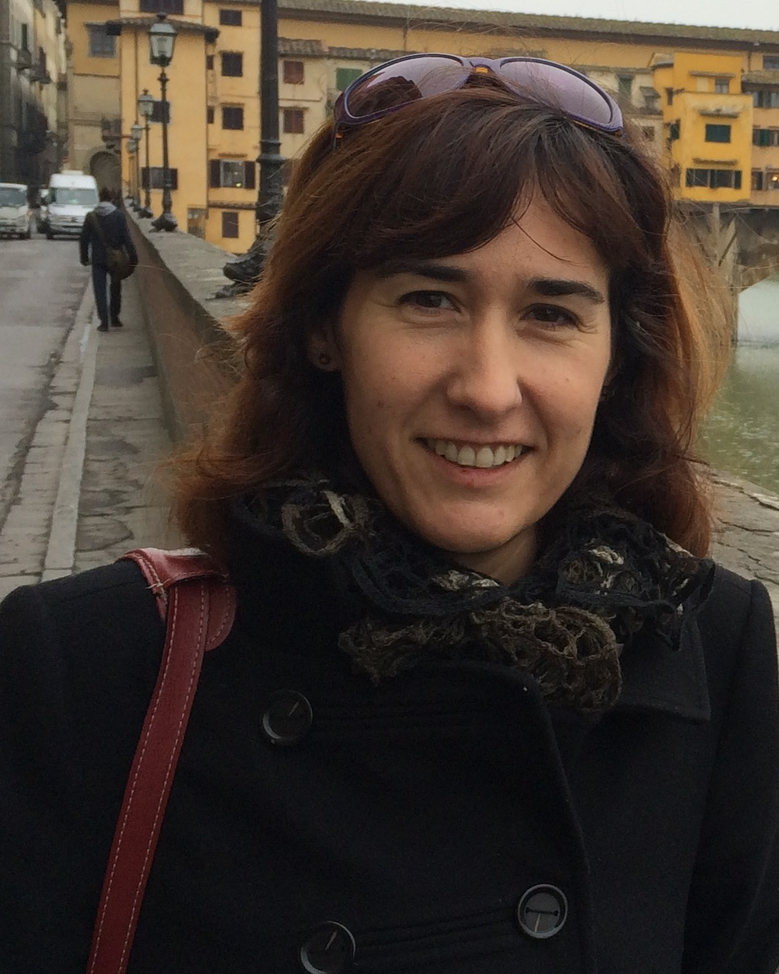 Dr Martínez' research interests include networked control systems, multi-agent systems, and nonlinear control theory with applications to robotics and cyber-physical systems. In particular, she has focused on the modeling and control of robotic sensor networks, the development of distributed coordination algorithms for groups of autonomous vehicles, and the geometric control of mechanical systems. For her work on the control of underactuated mechanical systems she received the Best Student Paper award at the 2002 IEEE Conference on Decision and Control. She was the recipient of a NSF CAREER Award in 2007. For the paper "Motion coordination with Distributed Information," co-authored with Jorge Cortés and Francesco Bullo, she received the 2008 Control Systems Magazine Outstanding Paper Award. She is a Senior Editor of Automatica and an IEEE Fellow. Recently, she was named the inaugural Editor in Chief of a new Control System Society publication, the IEEE Open Access Control Systems (IEEE OACS) journal.

Submission Window: 15 Nov 2022 – 30 April 2023
The section will be recurrent, and a planned submission window will be open at least once a year.

Unprecedented technological advances have fueled the creation of devices that can collect, generate, store, and transfer large amounts of data. This massive data outpour is profoundly changing the way in which complex engineering problems are solved, calling for the conception of new interdisciplinary tools at the intersection of machine learning, dynamic systems and control, and optimization. While the repurposing of control theories building on new Machine Learning methods can be highly successful, Dynamic Systems and Control can greatly contribute to analyze and devise novel adaptive, safety-critical controllers with performance guarantees. This special issue aims to contribute to this growing area of interest and calls thus for papers in this topical area.

Synchronization in Natural and Engineering Systems

Synchronized behaviors arise spontaneously and by design in various natural and man-made systems. For instance, distinctive network-wide patterns of synchrony determine the coordinated motion of orbiting particle systems, promote successful mating in populations of fireflies, regulate the active power flow in electrical grids, and enable numerous cognitive functions in the brain. While some systems rely on synchronization of all units to function properly, other systems exhibit a rich repertoire of synchronized behaviors including cluster synchronization, chimera states, explosive synchronization patterns, and even transient, cross-frequency, and phase-amplitude synchronization. These coordinated behaviors can emerge from the properties of the interconnection structure among the units, be the result of the dynamics of the isolated units, rely on the interplay of structure and dynamics, or be driven by exogenous stimuli.

Despite being one of the most studied phenomena in science and engineering, the principles underlying general synchronization patterns in complex systems and, importantly, effective methods to regulate different forms of synchronized behaviors, have remained elusive.

Cyber-Physical Systems (CPSs) are complex systems resulting from intricate interactions of computational devices with the physical plants. Recent advances in device manufacturing, computation, and storage have made tremendous advances in hardware and systems platforms for CPSs. With this growing trend in computational devices, CPSs are becoming more and more ubiquitous with many safety-critical applications including autonomous transportations, robot-assisted surgery, medical devices such artificial pancreas, smart manufacturing, smart buildings, etc. Unfortunately, the analysis and design of CPSs nowadays are still based on ad-hoc solutions sought by simply taking the union of the classical techniques in control theory and computer science. This results in error-prone analysis or design, and very high testing and validation costs. Formal-methods based approach to CPS design recommends rigorous requirement specification in every stage of the system development. Formal verification and controller synthesis are two leading approaches to provide correctness guarantees for CPS with respect to such requirements. While formal verification aims at providing a proof of correctness with respect to the given specifications, the goal of the controller synthesis approach is more ambitious: it takes a control system together with the specification and produces a controller such that the resulting closed-loop satisfies the specification. This special section aims to contribute to the growing area of formal methods for CPS and calls thus for papers in this topical area.

Please contact the OJ-CSYS editorial assistant with any questions. 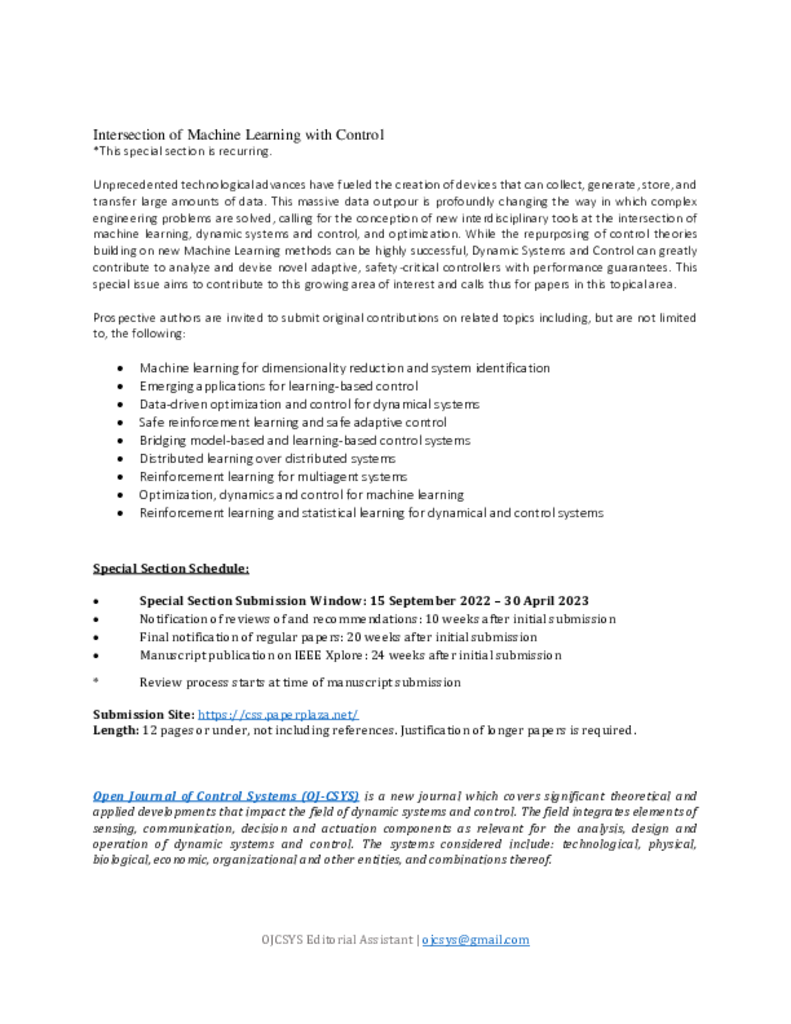 Intersection of Machine Learning with Control 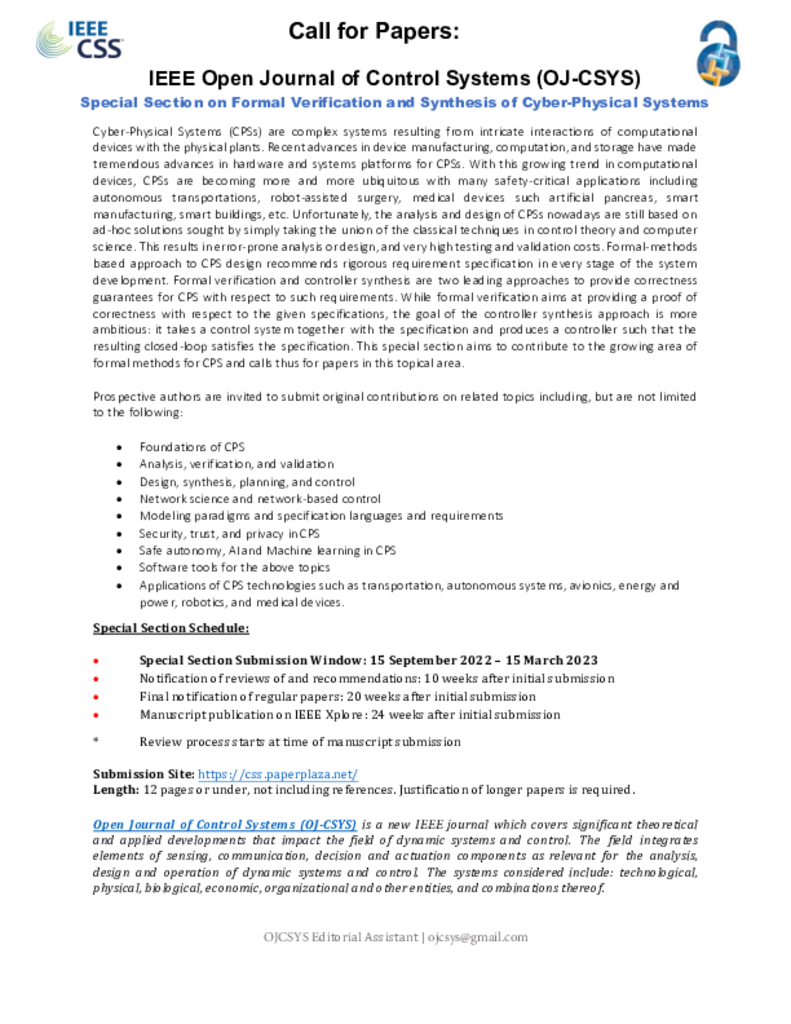 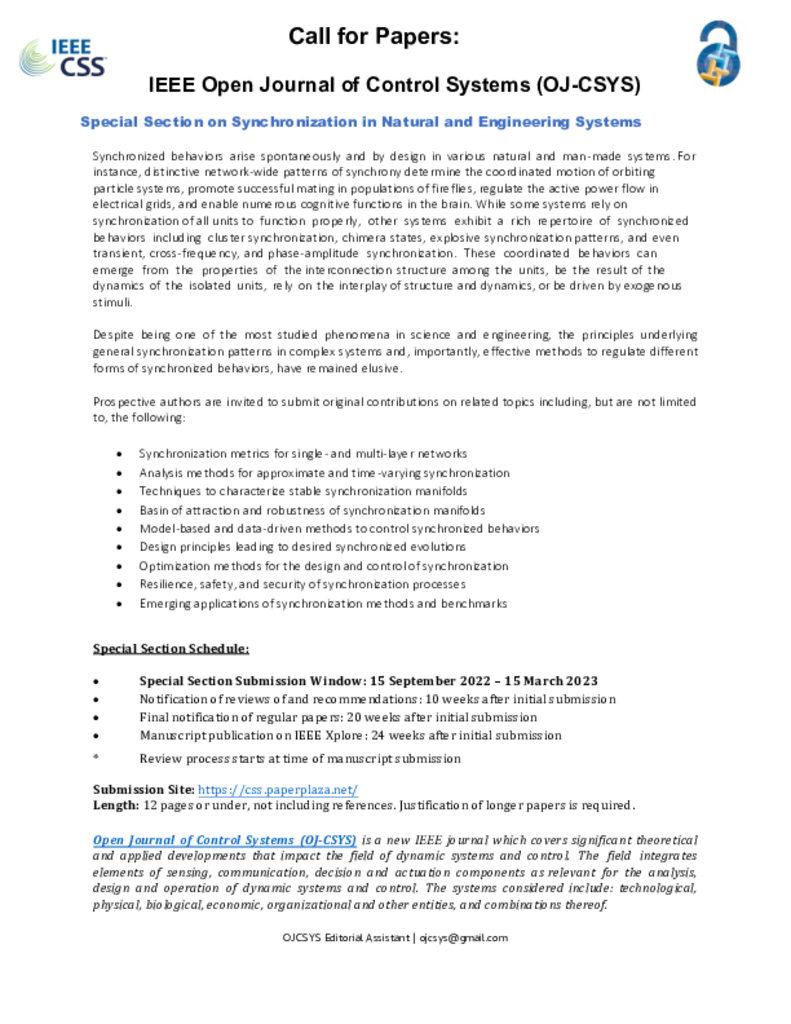 Special Section on Synchronization in Natural and Engineering Systems