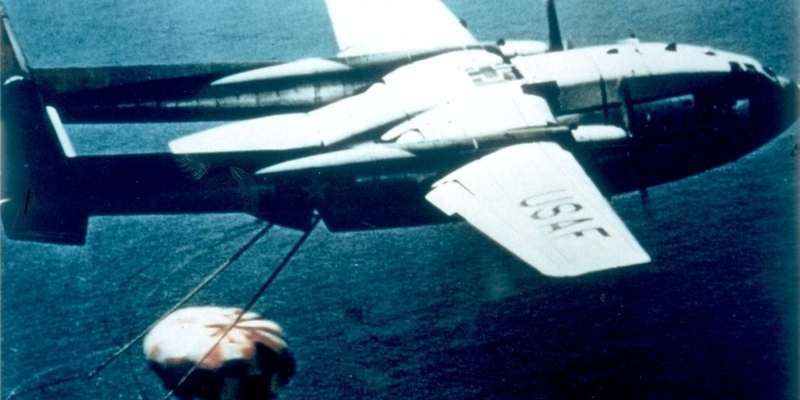 Lockheed’s Spy Satellite Programs Looking from above the Iron Curtain

URL’s for Zoom Webinar or YouTube Live Stream
will be emailed to registered attendees
24 hours and 2 hours before the event and at the time of the event.

CORONA was America’s first eye-in-the-sky space mission.  Lockheed Missiles and Space Systems (Lockheed) here in Silicon Valley was the system integrator of the Corona payload which included new camera, film and recovery capsule as well as the developer of never flown Agena which served as the upper stage to the Thor booster and spacecraft.  It was breakthrough technology in all aspects.

The CORONA program depended on the development of a new spacecraft, Agena, designed and built by Lockheed. Agena subsequently went on to support multiple other missions for many other customers, and essentially became America’s first space utility vehicle, with 362 launches over three decades.  Lockheed veterans will discuss the original CORONA mission and the key challenges Agena had to meet for long-term success.  They will illustrate how Agena subsystems and technologies coevolved and advanced together with system integration and test techniques, and how the program experiences taught the aerospace industry many fundamental lessons, including how to successfully specify and accommodate products from multiple suppliers.

Sam Araki was one of the first team members on the CORONA Program as a system engineer for the Agena spacecraft and the three-axis stabilized spacecraft for the camera payload. At Lockheed for 38 years he retired in 1997 as the President of Lockheed Martin Missiles and Space Company. He is a Fellow of the American Astronautical Society and a member of the National Academy of Engineering. He received the American Institute of Aeronautics and Astronautics’ von Braun Award (2004) for Excellence in Space Program Management and the National Academy of Engineering’s Charles Stark Draper Prize (2005) for his contributions to the advancement of engineering. He was named a Pioneer of National Reconnaissance (2004) by the National Reconnaissance Office.

Miles Johnson a thirty two year Lockheed employee retired in 1994 as VP Engineering of the Lockheed Martin Space System Division (SSD). Upon graduation from The Ohio State University in 1961 Miles joined Lockheed at Vandenberg AFB as a Guidance & Control engineer on the Agena/Corona Program. He advanced to the position of Lockheed Launch Conductor and participated in 8+ launches before transitioning to Lockheed’s Silicon Valley facilities where he was responsible for Agena/Corona system engineering & integration. He held subsequent SSD Program management assignments of Manager Engineering Integration, Chief System Engineer, Program Manager and Vice President Special Programs.

Jim Carlock a 32 year employee of the Lockheed. He started his career in 1967 as a guidance and controls engineer on the Agena and other military programs. He was later involved in other space technology applications and became program manager for the Hubble Space Telescope, Ikonos commercial imager, and the Lockheed portion of the International Space station.

Terry Zaccone a thirty-one year Lockheed employee, retired in 2000. After graduating from UC Berkeley, he joined Lockheed and worked on was the Barnes Horizon Sensor for the Agena. He continued his studies while working, receiving his MA in Physics from San Jose State and his PhD in Psychoacoustics from Stanford in 1982. Dr. Zaccone worked on Strategic Defense Programs as Manager of Lockheed’s Optical Systems Department in their Palo Alto Research Labs,. He then joined the Astronautics Division as Chief Systems Engineer for the Ground Based Free Electron Laser Technology Integration Experiment (GBFEL-TIE).

Hugh Satterlee will discuss thermodynamics of Agena and subsequent spacecraft.

Bill Monroe an eight year Lockheed veteran spent the following eight years with Itek Corporation, the Corona camera manufacturer. He contributed to the thermal control design of both the Agena satellite and Corona payload. He has a BS, Mechanical Engineering from UC Berkeley and an MSME degree at Santa Clara University. His work with Itek cameras also gave him opportunities at the Lockheed Skunk Works in Burbank, where he worked with both the U-2 and SR-71 design teams.

Tom Gardner will moderate. He is our committee’s treasurer and webmaster. Tom has extensive experience in the computer storage industry.